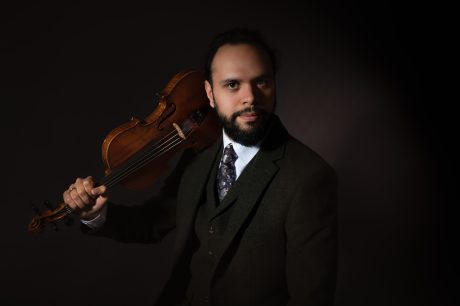 If you were lucky enough to attend our event with Nate Holder earlier in the year discussing Music and Islam, you may already be familiar with Manchester-based violinist and beatboxer Faz Shah, who presented the session. (If you haven’t caught up on it yet, you can watch the recording of the Music and Islam session and all of the other excellent Music Mark x The Why events here).

Farhaan Aamir Shah (better known as Faz) was the first Gold Arts Award winner in the Northwest for ‘Northern Dust’; a play he both wrote and composed the music for. A creative of diverse talents, he has performed on children’s television as a beatboxer and has delivered creative music education projects in over 100 schools, weaving his work as a musician into theatrical performances.

Most recently he’s been working on delivering the stories of refugees, their struggles, and their journeys to primary schools across Greater Manchester and London as part of the Harmonise project by Music Action International. The project culminates in performances at the Bridgewater Hall, Manchester on 14th June 2022 and Royal Festival Hall, London on 21st June 2022. Tickets are free – find out more and book to join in Manchester and London.

As someone embedded in the world of music and the arts on a daily basis, we are privileged to welcome Faz as a Champion at Music Mark. Faz joins Dr Kadiatu Kanneh-Mason, who was announced as Music Mark’s first Champion in January. The announcement followed a decision to move away from having a single patron, to appointing a number of inspiring individuals from within and beyond the music education sector who might inspire and represent the membership. Importantly, we’re confident they will help us to champion our vison for music education.

Bridget Whye, Music Mark CEO, said of the appointment: “Faz performed and presented at our 2018 Annual Conference and his enthusiasm and spirit was inspiring.  We were therefore delighted that he was able to return to present as part of Nate Holder’s set of sessions earlier this year and that he has now agreed to be a Music Mark Patron.  I look forward to working with him, and Dr Kanneh Mason, as they add their knowledge and experiences as Music Mark continues its work to support the sector.”

James Dickinson, Music Mark Chair, added: “Faz’s energy and enthusiasm for music education is going to be a great asset to Music Mark. I’m so pleased we’re working with him and look forward especially to Faz delivering the keynote speech at the North West conference.”

Look out for more from Faz in the coming weeks as we get to know our newest champion!

Faz Shah presented Music and Islam as session 2 of The Why x Music Mark’s series on diversity in music education. Watch it here.