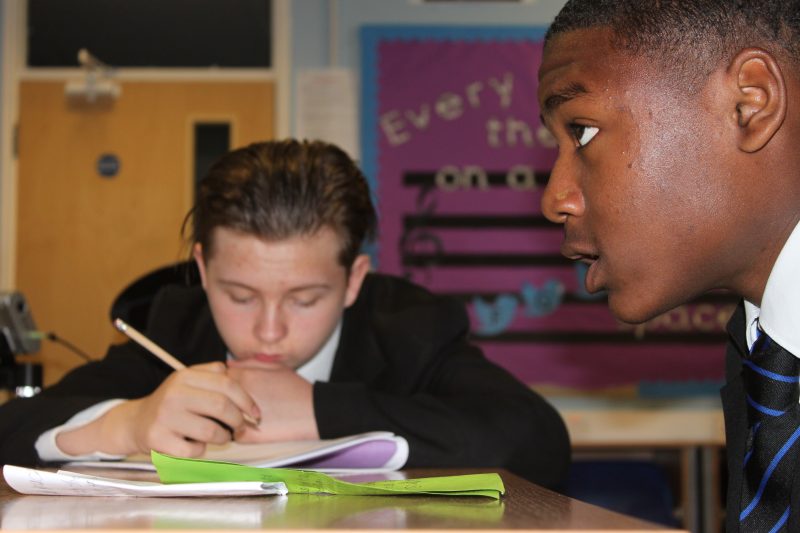 Whether it’s disinformation or straight-up prejudice, Hip Hop has maintained its air of dangerous mystique since it started infiltrating mainstream airwaves in the 1980s. What makes it look like an excellent PR coup is that the apparently subversive genre has steadily managed to establish itself as one of the most popular forms of music, breaking worldwide record sales. According to the Nielsen Music 2017 report, R&B and Hip Hop are now responsible for 25.1% of all music consumption in the U.S and have overtaken Rock.  It is the most listened to genre on Spotify and whilst UK Grime isn’t strictly Hip Hop, Stormzy’s Number 1 album Gang Signs & Prayer made it into the Top Ten of the UK’s official album chart of 2017.

It’s a long way from the “Rap is for gangsters” rhetoric, although it’s safe to assume this remains the view point for some. Rap, Breakdance and Graffiti, which came to define a whole generation of young and predominantly black creatives involved in the Hip Hop scene, were art forms led by artists ghettoized from inception. Now it appears to be Rap’s greatest irony – that from society’s rejection, its banishment to the underground, to the peripheral, it has returned as the winner. And as the saviour.

I’m not sure the historical redemptive quality of Hip Hop is what Karl and Tre of Year 9 are thinking of in their Rap Class the Tuesday morning I make the trip up to Burnt Mill Academy in Essex, but for those behind the scenes, who have worked hard to transform the once remote concept of weekly peripatetic Rap Tuition into a living, spitting two hour reality, it is now clearer than ever that Hip Hop, like all music, can radically change lives.

Charly Richardson, Head of Essex Music Service and Cristin Casey, Director of Performing Arts for the Burnt Mill Academy Trust, both sit with me silently at the back of the class as we watch tutor, rapper and artist Alex, also known as Lemzi, elicit from Karl and Tre the narrative tools used in Lost Ones by J Cole to express the different arguments in the song. I later learn that both students have gone from awkward and aloof to confident, articulate and creative young men. They’ve collaborated on their own song “Honcho” which, according to Tre, is about “never giving up and always enjoying your life”.

Something’s working, but the journey is different for everyone. “The impact of these rap workshops vary”, Alex tells me as we sit round for a chat following the class. “Some kids just like to come in and discuss certain things, they don’t even rap themselves, they just find it interesting to listen and watch those who are good at it. For others, like Tre and Karl, it’s boosted their confidence a lot in terms of stage presence and engaging with each other and people they don’t know. It was hard for them to talk to me, to a stranger, at first”.

Alex, who has been delivering Rap workshops with Waltham Forest Hub before being signed up by Essex started with two students at Burnt Mill in January and following the success of the first classes, and the Head’s keen eye for “positive, tangible outcomes”, there are now at least 12 pupils at the school enjoying weekly Rap tuition. The school hope to have Alex for a whole day next year.

“It’s not all about outcomes,” Cristin stresses, and as an expert trumpeter herself, the sake of music for music’s sake is a clear drive in her work.  “But, the outcomes [of Rap Tuition] in the eyes of the senior leadership team have always been very, very good. They see the exam results on paper, in pupil performance and confidence as they perform in assemblies and open evenings. And you should just ask the English teachers. From being mute in class, these kids are now writing pages and pages of stuff!” For Alex, the merits are simple. “Rap is enjoyment first of all. It’s the first music I would go to listen to, it’s the music that I connect with the most and I assume that’s how all the kids that come to this class feel. It tells them something about themselves that other art forms probably don’t. Some people find expression through classical music, others through dance, but with the kids that come here and for me, that self-expression comes predominantly through Hip Hop music. Rap is just a form of being poetic.” 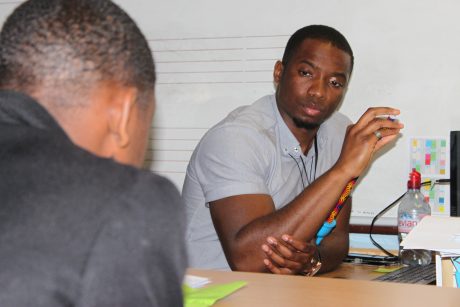 I think back to the class and recall how between verses of “Honcho”, Tre danced a little and bumped fists with Alex, while Karl turned around and gesticulated to us, in the same manner we see rappers and pop stars perform in their music videos. It was fun to watch, and a reminder that enjoyment should be as much part of the class as encouraging self-expression and communications skills.  “Giving the kids something they love and enjoy is really important,” Cristin tells me later. “Especially in the face of all these kind of restrictions and battles that we’re having in schools nowadays”.

For Rap tuition to take off like this and inspire students to re-engage with their school community is heart-warming to see. What is it about Rap that makes it so engaging for students like Tre and Karl? Maybe it’s a testament to the music form, that encourages free styling and personalised prose, a refreshing departure from more traditional classroom methods that had failed to capture their imagination. Or maybe it is the fact that Rap is the music they listen to at home and so bringing it into the classroom feels natural and seamless. Or could it be simply, fundamentally, that Rap Tuition has taken off because the institutional support is there. 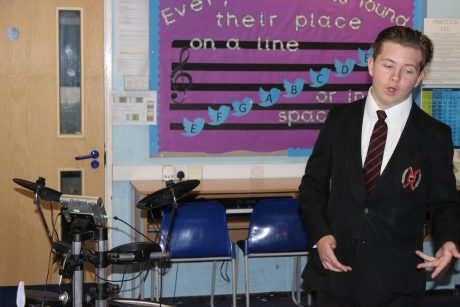 On first walking into the reception area of Burnt Mill academy, it is impossible to miss a huge black piano, perched on a slightly raised platform and surrounded by an open, welcoming seating area. From the word go, the message the school has on music is pretty clear. And it only becomes more evident as I learn of the staff’s dedication and commitment to providing enriching arts opportunities for all students. Following Alex’s class and after having said goodbye to Tre and Karl before they go off for their lunch, Cristin leads us into another music classroom, bight and colourful, and what seems to be very well equipped. Cristin and her department have fought hard to raise the profile of music and ensure it is “everywhere, all the time”. The academy’s Head has also instated free music tuition for all, so any child from Key Stage 3 up to year 11 can take up an instrument if they want to. Essex Music Hub offers subsidized rates for peripatetic tuition, allowing the music department and Cristin to offer the largest range of instruments to the most amount of students possible. “In the case of Rap tuition, it relies on a very specialist skill” Charly explains. “Although we are looking to develop talent locally, the tutors are coming out from London so we have to pay them a higher rate. But as we want Rap to be just as accessible as a violin lesson, we subsidize it by about 28% for the schools, compared to the 10% subsidy for instrumental tuition. And of course, we have vouchers for low-income families and no charge for looked-after children. When a school like Burnt Mill puts money behind it as well, then it’s great. Now we just need more to get on board!” 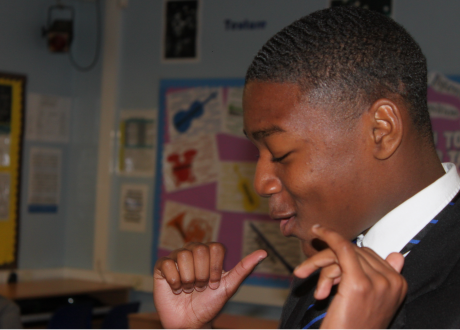 Limited school budgets and a conservative musical knowledge make selling Rap Tuition to schools a  little challenging at times, however in Essex, demand for peri Rap came from several schools in the 2017 autumn term. “It was a request coming from young people, we hadn’t asked or solicited at all. We had done rap projects before, a Grime project, lots of stuff with Charanga VIP Studio Sessions, but we’d never had the idea of having weekly peri teaching like you would with any other instrument.” Local demand required swift recruitment and although the tutors have ended up all coming from London, Charly insists he’s working on nurturing the local talent. “There is quite a good Grime scene in Essex, I’m in touch with a couple of the artists but they are all very young,  seventeen, eighteen. We need a bit more time before they are ready to teach in a school.”

It’s just the beginning, but as Rap’s popularity increases and more schools begin to catch on, the need to develop progression routes is already around the corner. “It is all quite early days for us, a lot of the stuff we can do for song writers and rappers is online, so by using software such as Charanga VIP Studio Sessions, students can make their own beats and record their own tunes, upload to Songwriter, an online chart,and receive professional feedback. The more listens they get the higher up the chart they go, so at the end of term, we showcase the regional winner. I’m also hoping to organise open mic Hip Hop nights with Alex and the Essex Music Development Agency.” Essex’s Community Schools are also under review as the service looks to transform them into a microcosm of what is offered as a whole in the area, including technology, rap and song writing. “There is work to be done in terms of progression. We have lots of bits, we just need to bring all of them together.”

Lunch break is coming to an end and a lively hustle and bustle starts to populate the corridor outside as students make their way to class. A young boy comes is asking for Lemzi and we know it is time to go. Before we leave, Charly wraps it up. “Rap Tuition now needs a push to let people know the offer is out there. I don’t think this is something that is going to be massive but it could open up opportunities and doors across the school. Like Cristin I believe Rap tuition has a value in itself but there is clear evidence how it can impact in a broader way. Its educational and social outcomes for children are valuable for everyone but particularly for those harder to reach young people slightly disaffected.  I know many think it’s just Essex trying to be cool!” Charly laughs. “But I think the outcomes are clear and you can’t really argue with them. It’s not just a tokenist thing, it’s a long-term project”. 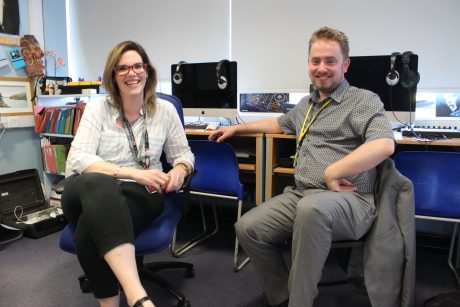