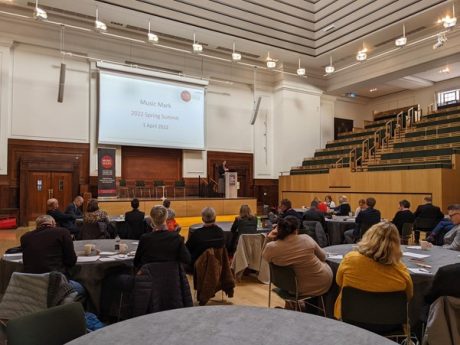 Music Mark’s annual Spring Summit took place this year on 1st April at the Friends Meeting House in London – the first in-person summit since 2019. Alex Aitken, a Music student from Cardiff University, joined the Music Mark team as part of a one-week work experience placement and shared his thoughts about the day.

The Spring Summit started with coffee and Panna cotta for hub leaders, providing much-needed time for leaders to catch up with each other in person – some for the first time since pre-Covid –  before moving into the venue to begin. Bridget Whyte, Music Mark CEO, introduced the summit with a summary of the year, as well as mentioning key issues that are prevalent in the music education sector:

Rebuilding of ensembles after lockdowns
The Spring Summit was focused around a series of topics that leaders could then discuss with one another. The first topic was the ‘rebuilding of ensembles after lockdown’ – the general consensus being that lockdown had had a negative effect on ensemble participation. Hub leaders found that older students moving on from ensembles (leaving to go to university etc) meant that there weren’t people for younger children to look up to, as well as a lack of experience and skill in ensembles. Ensembles have had to adapt accordingly. One music hub hired a composer/arranger to adapt and compose pieces for an ensemble that was lacking in numbers and skill, enabling the ensemble to still create quality music at a level suited to them. As well as the lack of participants, many hubs found that they had nowhere to run their ensembles, with previous venues either being closed, used for other purposes or simply becoming unaffordable.

Recovering singing in and out of schools
The second session was on the ‘Recovery of singing in and out of schools’. Many of the music Hub leaders commented on how helpful the Music Mark ‘Music Unlocked’ guidance had been when restarting ensembles. Leaders noted that there was a keen interest from many schools in introducing or increasing singing inside schools, especially after some successful ‘virtual’ choirs run by hubs during lockdown. However, many hubs also found that although the demand from schools had increased, there had been a drop in the number of pupils singing outside of school in hub choirs. 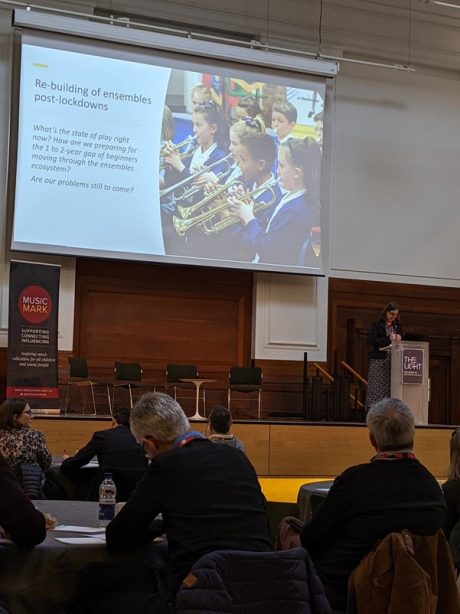 The state of instrument stocks
After a quick break (no Panna cotta this time!), the discussion moved onto the state of instrument stocks in music hubs. The common theme throughout was that most hubs had large stores of instruments that were unused, mainly due to the lack of uptake of instrumental lessons – some examples include 40 accordions and 30 double basses! There was a keen response from all Music Hub leaders for the initiation and formalisation of an instrument sharing platform, allowing hubs to easily share their unused stock around. Another issue that was raised in this discussion was the need for quality repairers. Many hubs were holding stock of instruments that are unusable, but there is neither the time, money, or facilities to get them repaired. Many hub leaders were keen to see a centralised repair service to allow for this to happen.

Diversifying the Workforce
Next, Sam Stimpson and Gary Griffiths facilitated a discussion on inclusion in Music Education. A focus of this discussion was on hidden disabilities in the sector. Sam and Gary highlighted the steps that need to be in place to allow for a full integration of educators with disabilities, as well as giving multiple examples of successful integration in the sector.

The looming ‘cost of living crisis’; how will it affect our business?
The final topic of the day was one that is playing on everyone’s minds – the looming ‘cost of living crisis’ and the effects it will have on the music education sector. All music hubs are facing a large rise in the cost for utilities, with some reporting over £4000 in heating alone. This increase in cost for everyone, yet without wages increasing to keep up, means that some hubs are aiming to become less reliant on parental income, as many families will have a reduced disposable income to spend on private tuition. London based hubs also shared concerns about staff being unable to afford to live and work in London, and the challenges that it will cause for retention of staff. The general consensus from music hub leaders was that the cost of living crisis is something that everyone is going to have to face, and that the key ways around it would be to adapt and to communicate.

After all the discussions Peter Smalley, Vice-Chair of the Music Mark board, spoke to thank all music hub leaders, as well as to stress the importance of working together in the coming months, and adapting to the changes that are coming, both from the refreshed national plan for music education, and from the increase in cost of living.

The Music Mark Spring Summit provided a fantastic chance for colleges to see each other in person after two years of working behind a screen. It also provided a good platform to allow for problems and ideas to be discussed and shared, allowing for a stronger, and more successful music education industry.

Alex is a second year Music student from Cardiff University and spent a week with Music Mark for his work experience placement as part of his ‘Business of Music’ module.