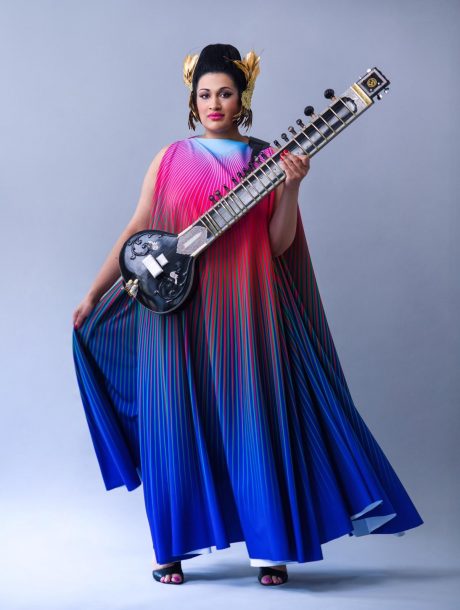 BISHI is a singer, electronic rock-sitarist, composer, producer, and performer born in London of Bengali heritage. The founder of WITCiH: The Women in Technology Creative Industries Hub – a platform elevating Women in Tech – she was an obvious choice to be the host our conference Fast Forward: Technology and Music Education. The live conference will take place over two days at the Brighton Hilton with a digital-only ticket option available following the success of last year’s fully digital conference.

An artist working at the intersection of music and technology, BISHI launched the podcast ‘Creative Women in Tech,’ in May 2020 which you can listen to here. The podcast seeks to elevate women taking charge of their own unique paths in the tech industry. It addresses the statistics around women in Tech making up only 5% of leadership roles and under 20% of all working female artists in the UK being signed to music labels. A passionate advocate for inclusivity in the music industry & the gender equality of women in tech, BISHI has been a broadcaster on BBC Radio 4, and is currently an ambassador for the Featured Artists Coalition and an ambassador for Imogen Heap’s Creative Passports.

As a multi-instrumentalist, she has been trained in both Hindustani and Western Classical styles and studied the sitar under Gaurav Mazumdar, a senior disciple of Ravi Shankar. BISHI has written, performed and released two albums and five EP’s on her own label Gryphon Records to critical acclaim. BISHI’s creative musical practice is shaped by her use of technology and we look forward to hearing from her as a Keynote and a chair of two sessions at the conference in December.

Conference tickets are on sale now at Early Bird rate, available to buy until 1 October.