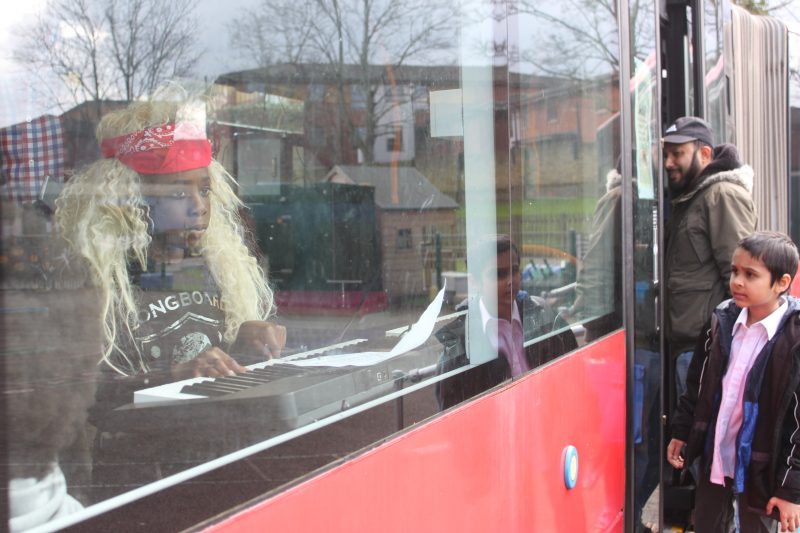 It is lightly spitting and the train is late. On a platform in Balham, South London, waiting for a connection to Thornton Heath in Croydon, I send an email to Tim Spoerer, the Music teacher at  Ecclesbourne Primary School. “Sorry, I might be late!” my message goes. I scroll back up through our conversation and see that he finishes singing assembly at 2 and then will wait for me to take me to Jam Bus for a quick interview, before Jam Bus club perform an 80s musical mash up dressed in 80s gear, wigs and all. It all seems very matter of fact, a day-in-the-life-of-a-music-teacher kind of orderly frenzy. I have no idea what to expect. 80s gear? A bus?

When I arrive at Ecclesbourne, Tim greets me at reception with a huge smile and what appears to be an endless reserve of energy. He doesn’t walk, he bounds and I can barely keep up as he takes me through the school and round to the playground where, parked right in the middle, as if having taken the wrong turn off the South Circular, sits a long red bendy bus. In direct view of the classrooms, the bus is impossible to miss – it has taken centre stage. Maybe I’m still trying to keep up with Tim but I feel myself gathering pace and rushing up to it as if my favourite rock star has just arrived. “This has to be the Jam bus!” I gush. 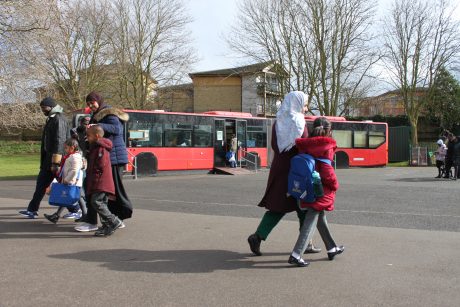 “It’s an old Ken Livingston bendy bus, it was on the Baker Street run” Tim proudly explains as we scramble on. Inside is an impeccably maintained aluminium bus, unbelievably fashioned into a colourful, dynamic and well-equipped music department. “Boris Johnson got rid of them all as they were turning corners and taking cyclists off the road. They got sold to Cyprus, and then from Cyprus they ended up running over even more people than they did in London so they sent them back again. There are loads of them just rotting away in some Lincoln air field”. It’s an inspired conversion and as a cyclist myself, I am relieved to hear the bus has reincarnated into something more, well, off-road.

Ecclesbourne’s music department, or Jam Bus, is the fruit of Tim’s hard work, determination and the help of a very famous friend. “I was one of the ushers and Ed Sheeran was the best man at a friend’s wedding. We used to be gig partners back in the day and sometimes he’d crash on my sofa. I hadn’t seen him in a while so I told him about this music department I was trying to build and how it was in need of a cash injection. The whole project cost about 40 grand. Ed said; ‘You’re not asking for 40 grand are you?’ No, I told him, just 10 for the bus”. 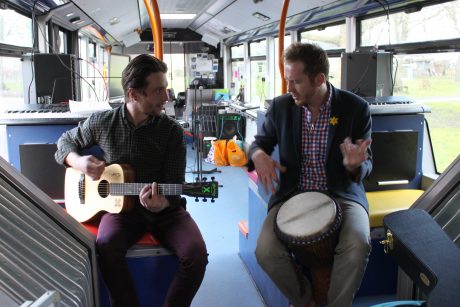 Tim didn’t think he would need that 10 grand from Ed Sheeran when he first started at Ecclesbourne. “I was aware a mobile trolley stuffed with instruments was the current set up of the music department when I arrived but I imagined funds would be released to build a building. I did my research, calculating 100 thousand here, 100 thousand there only to be told there was no money. I thought – why did you bring me in then?  That really surprised me”.

Surprised yes but Tim remained undeterred, motivated by what he didn’t want – to push a trolley round from room to room forever more. He looked into temporary units but found them dull and uninspiring. He considered at one point a double decker but, “I’m 6 foot 4 and the stairs are a nightmare”. He eventually looked into the articulated bus, or the bendy bus as they are more popularly known. He found a company called South East Coachworks who sourced and converted the bus off site, driving it in just in time for the new Autumn term in September 2016.

“What I wanted was a classroom space, peripatetic teaching space and a storage space and that’s what we’ve ended up having. It works a treat, the kids love it and they all get incredibly excited about the Jam Bus. There is still potential to build it more and keep developing it and we have a crowdfunding campaign to do just that.” Turns out Ed is very good friend and has donated a signed guitar for the cause. 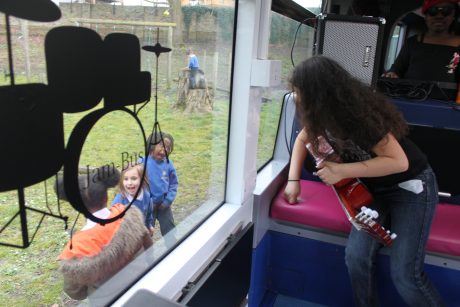 Curriculum lessons run Wednesday, Thursday and Friday to full classes of 30 children. How they all fit in is beyond me but Tim assures me, as he moves about the bus folding microphones and opening music stands from former bus seats, that it is entirely possible. Tuesday afternoon is dedicated to peripatetic work and the Jam Bus club, whose members will be performing this afternoon’s 80s mash up of Living on a Prayer, Summer of 69 and Jump by Van Halen. “We’ve been practising for a while to perform. We want to give them an opportunity to show mum and dad what they’ve been learning. They have to have an opportunity to perform, if not what’s the point? Learning music is good for your brain and everything, but it is the performance that gives it all meaning”.

Tim works alongside Shaun Da Silva Longueira, a peripatetic teacher and long-term colleague. A passionate musician himself and specialist guitar and ukulele teacher, Shaun is just as keen to share some of the Jam Bus magic with me. “Since we’ve started having guitar lessons, I walk through the school and I have kids coming up to me pleading; ‘Sir sir sir, can I have guitar lessons?’, and we have this big long waiting list. Kids are seeing their friends go off for lessons and coming back with huge smiles on their faces so naturally everyone wants to get involved.” I can imagine. With the bus occupying such a prominent position in the playground, it has to be king of the classrooms. “I had 88 apply this year for the choir and I took 25”, Tim continues. “In the end, I extended it to 27 because it was just impossible to keep turning everyone down”. 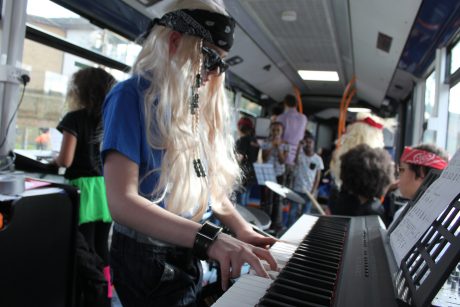 The Jam Bus club on board and in role 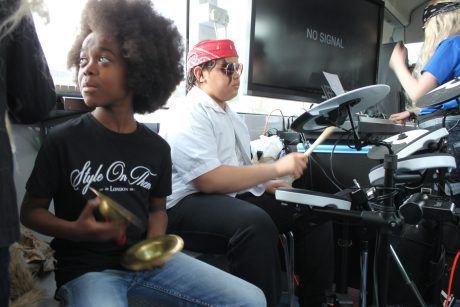 We are interrupted by a phone call from reception. “It’s a mum asking if she can attend the show this afternoon. Is there room for her?” Shaun asks. “Tell them yes!” Tim replies as we both look around and try and estimate how many more people can fit in this bus.

It’s getting closer to 3 o’clock and I can feel the tension rising. It’s show time soon and the Jam Bus Club are getting changed into their borrowed 80s outfits. I am told that today is a special day and everyone is very excited for the performance, but usually the children are in by now helping both Tim and Shaun with the set up. Much of the music education the children receive is about preparation, discipline and ultimately, professionalism. And it’s an education that is starting to pay off, not only because today they can perform and see that all their hard work has led to a tangible achievement, but also because their overall performance at the school is also improving.

“We music teachers don’t just say this because we love music, we say it because we used to be in that boat” Shaun assures me. “I was rubbish at school but learning an instrument and seeing the process of being professional helped me sort things out and all my other grades started to improve. It’s not just the playing of an instrument, it’s the skills you learn for the rest of your life that makes music so important and why we make such a fuss about it. That’s why it’s so frustrating to have music departments dying down in schools because schools aren’t seeing how important learning an instrument is. It’s not about becoming a professional musician, it’s about what you learn from learning something.”

The success of Jam Bus has led to the research and development of Jam Bus 2, this time supported by Croydon Music and Arts. Jam Bus 2 is the upgrade, and the plan is for it to spend each term in a different primary school introducing a new Whole Class Ensemble Teaching model across Key Stage 2, with options for schools and pupils to continue when the bus leaves.  Jam Bus 2 will also act as a music studio for after school opportunities at the new Onside Youth Zone being built in the borough.  “Some children have never had the opportunity to play an instrument,” Shaun continues. “To have a visit from the Jam Bus, especially once a week, could give them that little taster, that window of opportunity to be exposed to something they would never have been exposed to otherwise”.  The bus will also visit local festivals to highlight the contribution young people make to cultural life in Croydon.

Back in the original Jam Bus, it’s finally show time and suddenly the bus is crawling with mullets, afros and bandanas. Both teachers leap into action, Shaun at the back applying some last minute face paint, Tim adjusting cables to mics for a quick sound check with the singers. The bus is heaving and outside, curious younger siblings hover. The atmosphere is electric. They said it wasn’t all about the music, but once they start playing, in time and in harmony, I can’t help but sing along. 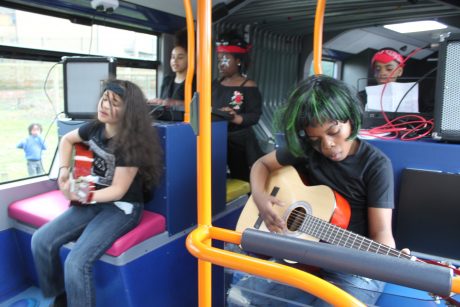