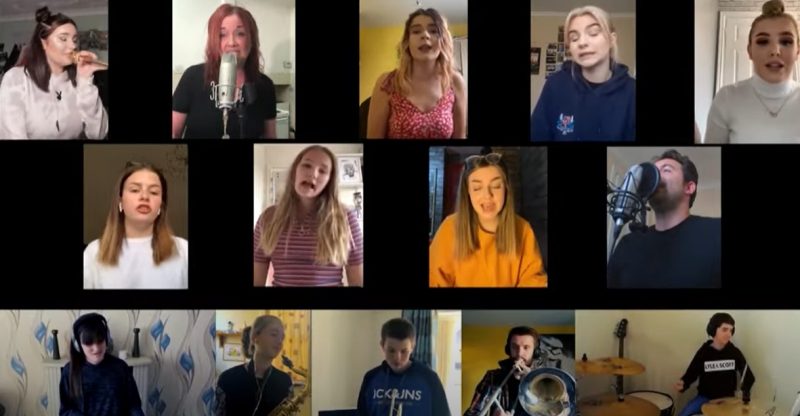 One of the major challenges for those of us working in Music Education is recreating the youth group ensemble experience, a frustration which many of our members have echoed. Youth choirs and bands provide important opportunities for their young members both artistically, as they help them to develop their playing and performance skills, but also socially, giving them access to new groups of people. Coronavirus (COVID-19) has put an abrupt stop to in-person rehearsals, and has prevented countless planned concerts, development opportunities and chances for friends to meet together.

In spite of this, it has been so inspiring to see the ways in which the sector has continued to create meaningful opportunities for their membership in this strange new world we’re living in. Lincolnshire Music Service released a particularly brilliant video recently, a performance of “We’re Still Standing” performed by the Boston Youth Jazz Orchestra (BYJO). We were lucky enough to chat to Lincolnshire Music Services Area Manager Lee and BYJO member Isy about “We’re Still Standing” and the ways in which they’re keeping the ensemble connected during lockdown.

Lee Hextall is an Area Manager for Lincolnshire Music Service and has lived in Boston for nearly 30 years. He began as a brass tutor and started Boston Music Centre in 1992.

Isy King is a young visually impaired pianist who’s been playing with BYJO for the past 18 months, prior to which she was a member of the Junior Mash-Up Band for 3 years.

What would your top tips be for someone trying to set something like this up?
Lee: Make sure you have all the relevant photo permissions and consents for young people before you start. Have a plan and a deadline. Provide clear instruction for young people in a how-to guide. Have young people make vlogs of their experience to help each other. Drums and percussion are difficult to record and although our video appears to show acoustic kits the audio is an electric drum kit recorded directly. At the video editing stage have a clear plan of what you want it to look like as it is very time-consuming down the line to make changes when manipulating so many different pieces of media. Do not begin the video editing until you have received all the video.

How has your experience of BYJO changed due to lockdown?
Isy: Lockdown has been sad as all our concerts and rehearsals have been cancelled and I really miss them! We now have weekly open-mics where we all get the chance to play and it’s been good to be together in some way, even if it’s only through the iPad!

What have you set up for BYJO now that meeting in person is no longer possible?
Lee: BYJO has a weekly virtual get together using Google Meets at what would be our usual rehearsal time on a Wednesday at 7.00pm for about 45 mins. During this session we have open mic opportunities and sometimes a short quiz. Over the next few weeks we have a spot for invited alumni to join us for a chat and open mic. This week actress Courtney Bowman is joining us to chat about her journey after BYJO and current west end role as Anne Boleyn in the musical Six.

How did you manage to coordinate the ‘We’re Still Standing’ video project?
Lee: The video project was discussed and proposed in our weekly virtual get together. Thanks to the new Music Service License, we were able to adapt an existing arrangement to provide parts and resources for young people to record with.

How did you find the process of rehearsing and recording ‘We’re still standing’?
Isy: I found learning “We’re Still Standing” on my own a bit tricky but Lee sent me a special piano recording which I learned off by heart at home. When I was ready, my Mum filmed me lots of times on her phone until I got it just right. She was so happy she cheered at the end which was kept in the video!

Lee, what additional skills did you have to learn or draw upon to successfully manage this new way of working?
Lee: Skills in adapting and arranging music and producing guide play along tracks for young people are essential. I did the sound mixing and video editing myself with Adobe Audition and Adobe Premiere Pro 2020. I had used these programmes a little before but completely underestimated the time and complexity involved in a project like this.

What were the challenges?
Lee: I had never presented to groups of young people online before and quickly learned the limitations of the various virtual meeting platforms. I am an experienced music leader but found myself talking too much because it’s tricky to read the group reaction. In our track thankfully there were no tempo changes or pauses! These would need to be scored imaginatively. Arranging and creating guide media is essential to the success of these projects.

What does being a part of BYJO mean to you?
Isy: Being part of BYJO is so important to me. I like the different styles of music we play and there is always something new to perform. I’ve made lasting friendships with other members and it makes me feel good to be part of something.

What does ‘We’re still standing’ mean to BYJO?
Lee: The feedback from parents and young people indicates they are proud to have taken part and contributed to a musical thank you. I think they are really starting to miss their band mates and being creative together.

Have you still been socialising digitally with BYJO members?
Isy: Our weekly open-mic sessions have been quite social, we have done quizzes and everybody sang Happy Birthday to me last month as I have also had a Lockdown birthday! I look forward to meeting up every week.

How do you think delivery of BYJO projects may change in the future, even after the pandemic is over? And what might be next for BYJO?
Lee: I think recording projects like this have a real future moving forward. I think a basic USB microphone and headphones should be part of every young musicians’ equipment. The challenge of recording alone with a backing track is a very exacting musical process. I am positive when we eventually come together again this tune will need little rehearsal preparation for performance.

Isy: I really enjoyed hearing the finished result of “We’re Still Standing” and it was even more amazing to hear it on the radio. Maybe in the future we can do some more recording in an actual studio!