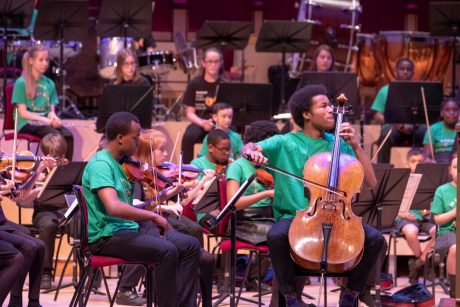 Arts Council England is launching a major multi-year programme to unlock musical talent in communities across England. The Fair and Inclusive Classical Music project will work with orchestras, music educators, broadcasters, and record labels to help classical music grow over the next decade. In doing so, we believe that the entire music sector will be beneficiaries.

The project is in response to research published today within the Creating a More Inclusive Classical Music report, which reveals that children and young people not exposed to Western classical music as part of daily life, or whose families did not have the means or opportunity to support commitment through lessons or study, are unlikely to join the classical music workforce. Where you live, and what opportunities are available locally, have an important influence on your ability to progress.

Arts Council England believes more needs to be done to open up access and opportunity, so that those who work in the classical music sector can become more representative of England today – in terms of class, geography, disability, ethnicity and gender.

As part of the Fair and Inclusive Classical Music Project, Arts Council England has developed an action plan for the next three years which includes:

The Creating a More Inclusive Classical Music report shows that around 80% of classical musicians reported that their parent or parents have a degree, and that they grew up in more affluent areas where high proportions of the population attended university.

It also found people from lower socio-economic backgrounds struggle to get fair access to a full range of learning and employment opportunities. The cost of lessons, of the instruments themselves, accessories such as sheet music, even the cost of travel to lessons and to other related activities and events can all be significant barriers from an early age. The issue is exacerbated by the low pay and unsocial hours that are a widespread feature of the arts. We will never know what talent that might have gone on to global acclaim was passed over by a system that fails to offer a fair chance for all.

Survey responses also highlighted that a quarter of women stated they had faced financial barriers such as low salaries or unpaid internships (24%) compared with 15% of men, meanwhile around half of LGBTQ+ respondents (48%), disabled respondents (49%) and Black, Asian and other ethnically diverse respondents (55%) agreed that they face or have faced barriers restricting the opportunities available to them.

From well-known TV programmes, films and video games to the ensembles supporting the West End, BBC Proms, and the thousands of concerts that take place across this country every year; classical music is a vital, vibrant, and versatile part of the creative sector of this country and a major contributor to our global reputation.

Arts Council England wants this project to act as a spur to accelerate change.

Darren Henley, Arts Council England Chief Executive, said: “We believe passionately in classical music and that it can and should appeal to more people. Where you are from and your background shouldn’t be a barrier to your chances of developing your talents. That belief is at the heart of our ten-year strategy Let’s Create. We are already supporting projects that are delivering some fantastic work to improve access for all but there is a need for much more collaboration to make sure that no-one misses out. “Classical music is already a big part of the soundtrack to our lives – let’s make sure everyone is given a fair chance to carve out a career in this important part of our creative and cultural sector.”

Arts Council England commend programmes already taking action to address these issues like the Orchestra Live’s Share Sound Project, which saw 250 young musicians work with orchestras to create, compose and perform new music, remotely, during the pandemic; and schemes like the Awards for Young Musicians programme, and the London Music Fund’s Scholarships that fund extra music lessons for hundreds of talented young musicians from low-income families.