Words and photos by Stephanie Kennedy

“It wasn’t always like this”, they tell me, as we sit round cups of tea, on a windy, rainy day in Luton. The weather outside crashes ominously against the windows of Dallow Primary but inside this particular primary school office, the temperature is just right. “No, it wasn’t like this at all. When we first started our work here, no one sang”. 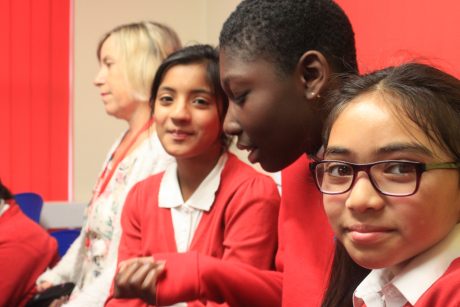 I am sitting with Linda Nouch, Headteacher of Dallow Primary school; Kerry Watson, Head of Luton Music Service and her colleague Julia Fraser, Operations Manager. Julia however, I am meeting in her capacity of the all-singing, all-dancing choir director and leader of the singing assembly, a role Kerry takes up too in a number of other schools in the Luton area, sometimes already in the school hall singing The Healthy Habanera by 8.00 am.

When I visit Dallow Primary it’s almost December and the surrounding Luton shops are dripping and glistening in tinsel and fairy lights. I first visit the school choir, made up of students from years 3-6 and then take part in the school assembly with the rest of the students and staff, both led by Julia, both very festive with songs about reindeers and mince pies. These are of course the songs of choice for this time of year in this part of the world, except only 2% of students at Dallow Primary are from Christian, or western secular backgrounds. Very few have English as their mother tongue and 33 different languages are spoken here, from Pakistani to Roma, Greek to Albanian. And yet, “Christmas is really big here at Dallow”, Linda gleams. “We don’t have huge amounts of children who celebrate it but they absolutely love it!”. I could tell. The smiles, laughter and all-round cheer I had witnessed ten minutes earlier in assembly felt like one big joyous knees-up, quite a feat following the lunch break on a dreary winter’s afternoon. “When I first came here, there was no singing and no celebration of Christmas,” Linda continues. “I got a lot of: ‘We don’t do that, it’s against our religion, we don’t do P.E, music or dance.’ And I just couldn’t get my head around that. This isn’t a faith school, so we should be doing all those things, they are part of the national curriculum. Today I don’t have anyone who is withdrawn”. 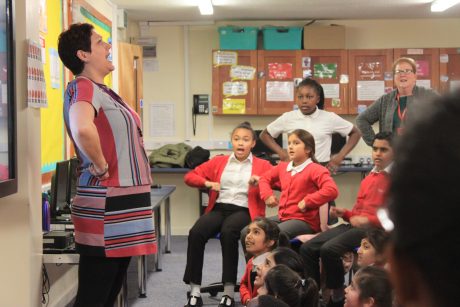 This level of participation and engagement across the school community has been hard to build but Julia has seen the gradual change over the years: “About 4 years ago, I was doing a song about harvest, singing about bacon and ham, and the first time I did it there was a big gasp from a couple of teaching assistants. And so I thought, before I continue, I better check the lyrics are ok with Linda. And she replied with her normal ‘ABSOUTELY!’” All three laugh at Julia’s impression. “There is nothing wrong with that!” Linda exclaims. “They are food types and it’s fine if people choose not to eat them”.

So if Harvest is about food, Christmas is popular culture, or just a good bit of story-telling. It might not be happening in everyone’s homes but it is happening outside, on the TV, in town centres and shopping precincts. “As long as we don’t sing Jesus is my lord, my saviour, we’re alright!” Julia confirms, and the songs she chooses are secular. Generally, the singing assembly celebrates all big cultural events, “the same way the curriculum celebrates all faiths” Linda insists. ‘Medina tun Nabi’ is one of the children’s favourites, which is a Muslim song based on going to Medina. “Around Diwali I do lots of material on light,” Julia continues, “however this year we focused on Remembrance Day as it was the centenary. But I do many, many festivals, and I love them because without them, planning a singing assembly would be just too random!”

Whatever the theme, and whatever the language or religion of the students, music has become the common thread in Dallow Primary, and singing the glue of both the student and staff community. If one class is doing work on shapes and shadows for example, they tap into Julia’s encyclopaedic knowledge, or scroll through her online library she leaves with the school, and teachers usually manage to find something that fits the lesson. 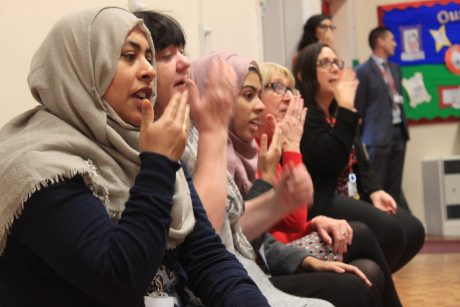 I understand this when I meet maths teacher Grant Chaney and music coordinator Laura Wilson before my interview with Linda. “The benefits of having so much music at school has definitely spilled out into other subjects”, Grant tells me. He has now started using Maths Rocks, a maths app that uses pop songs to help students learn their times tables. “The idea to use a maths app was only taken up this year, on the back of the head’s initiative to embed music into the school. We relaunched a new system and now students get a certificate with Ed Sheeran for their four times table, a Little Mix certificate for eight’s, and so on”. Laura, who also teaches Year 4, tells me how much other teachers are enjoying “Music of the Month”. I had noticed November was dedicated to Jazz as soon as I had walked into reception. A large colourful board pinpoints to different singers, and Nina Simone was oozing out of the small speakers. I couldn’t help but notice (of course) the Music Mark School Member certificate placed proudly in the middle. “I’ve had emails thanking me, saying that it puts them in a good mood as well as the children. We also play different types of music at certain times of the day, so one thing for independent writing, another for getting changed for PE, trying to drip the music in whenever we can!” 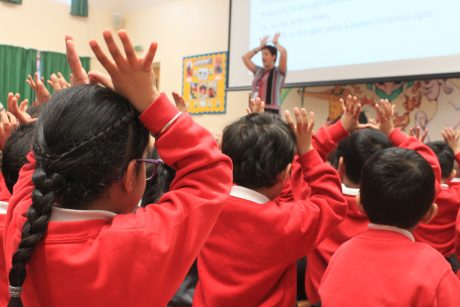 All of the children at Dallow Primary access music directly. Year 6 have drumming lessons, Year 5 have guitar lessons, Year 4 recorders, Year 3 a musical mix with different instruments, and Lower School do extra singing and some percussion. Classes are led by Luton Music Service peripatetic tutors which, Linda tells me, is value for money. But it is the choir and singing assemblies run by Julia, and supported by other teachers at the school such as Laura and Grant, that have proven to be the most popular, both at Dallow but throughout Luton too. All but two schools in the area participated in the Luton ‘Singing Spectacular’, while the national Young Voices concert has over twenty Luton schools taking part. Most local parents cannot afford the expenses, so schools fund it themselves. “We don’t ask the parents for any contributions”, Linda confirms.

So if the student population at Dallow Primary was once shy, and teachers reluctant to have music and sport in the curriculum, what do the parents think about all this change now? Julia turns to Kerry and asks; “Do you remember the mum at Denbigh High School? They put on Sound of Music, 15 Muslim girls singing hallelujah in the opening chorus, wearing robes and crosses. For the dress rehearsal, we invited students from Dallow Primary and they thought it was brilliant and wanted to join in. There was one girl from a refugee family, the oldest of five whose mother never went out and the family had no money. The mum had got one ticket for her for the first performance, and one ticket for the father for the second performance. The girl was only on stage about two or three times but by the end of the show, the mother was in floods of tears. She said to us: “I’m not going to let my husband come tomorrow, I’ve got to come and see it again myself!” And she returned the following night! That small role in a school production might be the smallest thing for some, but for them, it literally changed their world.”

Linda cannot specifically pinpoint singing as the reason the school has gone from Special Measures to Good according to Ofsted since she started working here. But the benefits of music are clear. Its feel-good factor is a reason for kids to get up in the morning and overtime, it has helped build confidence. And what about literacy? In a school like Dallow Primary, with 98% EAL learners, does singing help with developing language skills? Linda agrees, cautiously. “To start with, you see the new students watching everybody else but very soon they start to pick it up, even though they might not understand what they are singing. I think part of it is because the assembly is a communal and not an individual activity. We don’t make children stand up and sing on their own, and everybody is joining in, so it is less frightening than a classroom. I believe it’s also to do with the rhythm of the signing and the visual props, it becomes a whole-body experience. I think it really helps to settle them. Often you see them singing in assembly first before speaking in the classroom.”

According to Julia and Kerry, the space to make mistakes and not be judged is key. “It is very, very unheard of that someone individually gets told off at assembly. There is no right or wrong and everyone can sing even if they are out of tune. I might guide in a certain way, but everyone just sings regardless.” In the classroom, they tell me, if a student doesn’t understand, they might feel awkward, uncomfortable. “Whereas in choir,” Kerry concludes, “if you make mistakes, you laugh about it!” 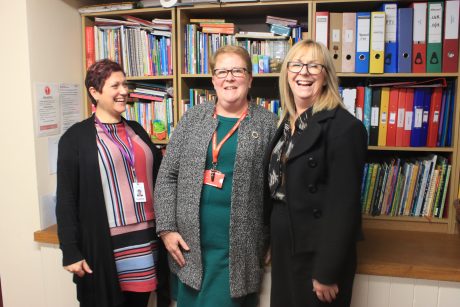 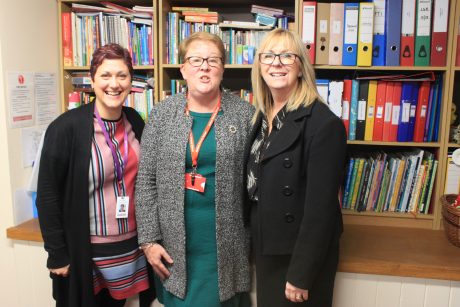 Laughter all round. From left to right: Julia Fraser, Linda Nouch and Kerry Watson